There are many speculations as to the origins and meanings of the late 18th century nursery rhyme Rock-a-bye-Baby. Once I became old enough to think about its meaning, its chilling final lines “When the bough breaks, the cradle will fall, down will come baby, cradle and all” have given me sober pause. I have come to see them as a kind of cipher for unspeakable tragedy.

“I heard the news today oh boy.” Bowie used the line in his 1975 song “Young Americans” and Dylan included it in his tribute to Leon “Roll on John.” It opens that last cut on Sgt. Pepper’s Lonely Hearts Club Band. For those of us old enough to remember that album’s release in 1967 there is much to think about in those lyrics.

A text message last night at 7:15pm EST shattered our world. One of those unexpected lines out of the blue announced by that familiar ding on our smart phones when a new text arrives. It was from our beloved friends Dave and Patty Tyler:

Our son Daniel Tyler just passed away. We are devastated

Dave and Patty are musicians par excellence. David in addition has a mathematical mind like a steel trap and Patty has a voice that is truly transcendent and beyond this world in power and feeling. She is one of the truest souls I have ever known. I know their hearts are utterly broken and a thousand lines from the music they play, sing, write, and love, and the Scriptures they have built their lives around, are flooding their souls. Such times are especially hard for artists as their souls are tuned to a perspective that is as painful at times as it is insightful. A flurry of texts and a touching call with Dave a bit later filled in a few details. Daniel was on a job in Nebraska. Yesterday he began to feel weak, like something was wrong. He was checked out medically and released, but ended up collapsing and dying later in the day in his hotel room. Dave got a call from the ER with the news.

Of all the pain we humans can experience surely that of losing a child is at the top of the top of any list. But there is no word such as orphan, or widow, or widower. No naming or labeling the pain. As one of our friends put it last night, who has experienced the same, there is simply nothing one can do or say. So I will say no more here but I felt this early morning, waking up at 5:33am, after a tossing night of thinking about the Tylers, I had to at least write this with this touching picture from Patty’s Facebook page of a happier time so that captures her wonderful personality and love as well as that of her dear firstborn son Daniel. 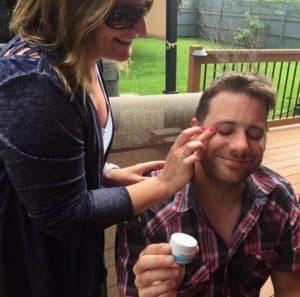