Arthur Koestler, according to his biographer Michael Scammell, was was the only significant writer to stare death in the face in the Spanish Civil war (1936-1939). This includes Hemingway, Dos Passos, Auden, Orwell, and many others who had flocked to Spain. His three months in prison in 1937, that he recounts in Dialogue with Death shook him to the core. For those readers not familiar the international efforts to oppose Franco, the Joris Evens 1937 film, Tierra Española, which Hemingway had been instrumental in bringing to the world, is available on Youtube. Day by day Koestler listened from his cell no. 40, as prisoners were being shot at midnight. He wrote prolifically, beginning to question whether revolutionary violence in the end violated the sanctity of life, and he scratched out Euclid’s theorem on the prison walls to keep his mind focused. During that period he was greatly influenced by reading Schopenhauer and corresponded with Thomas Mann. The prison’s confinement and the imminent possibility of death, plunged him deep into thoughts about the existential meaning of life. He experienced a transformative new consciousness–as he took flights of philosophical  contemplation. Scammell describes it this way:

Koestler concluded that his hours spent by the prison window scratching equations had brought mystical insights into another realm of being. He was filled ‘with a direct certainty that a higher order of reality existed, and that it alone invested existence with meaning.’ Koestler likened it to a ‘text written in invisible ink; though one could not read it, the knowledge that it existed was sufficient to alter the textual of one’s existence,’ and elsewhere compared it to Freud’s concept of the ‘oceanic feeling’ an overwhelming intuition about the infinite and the eternal that was the essence of religious faith (p.150).

For Koestler, at that moment, it was deep contemplation of the nature of math, but it could just as well be art or music or love or a thousand other numinous moments of insight in our lives. The metaphor of “invisible writing” gave him the title for volume two of his autobiography, The Invisible Writing (1954)–following Arrow in the Blue which had been published just two years earlier.

I knew little of Koestler until age 32 when I encountered his most mature work titled Janus: A Summing Up, written forty years later. Koestler carried his “invisible writing” insight with him to the end. I will never forget how I read Janus in one sitting  through the evening, into the night, finishing it early the early morning as the sun rose. It put me in a kind of trance. I just went and pulled the book from my shelf, reminding myself of that May 19, 1978 morning; I wrote inside the front cover, in my tiny scrawled script, the following, with a flair of youthful enthusiasm: 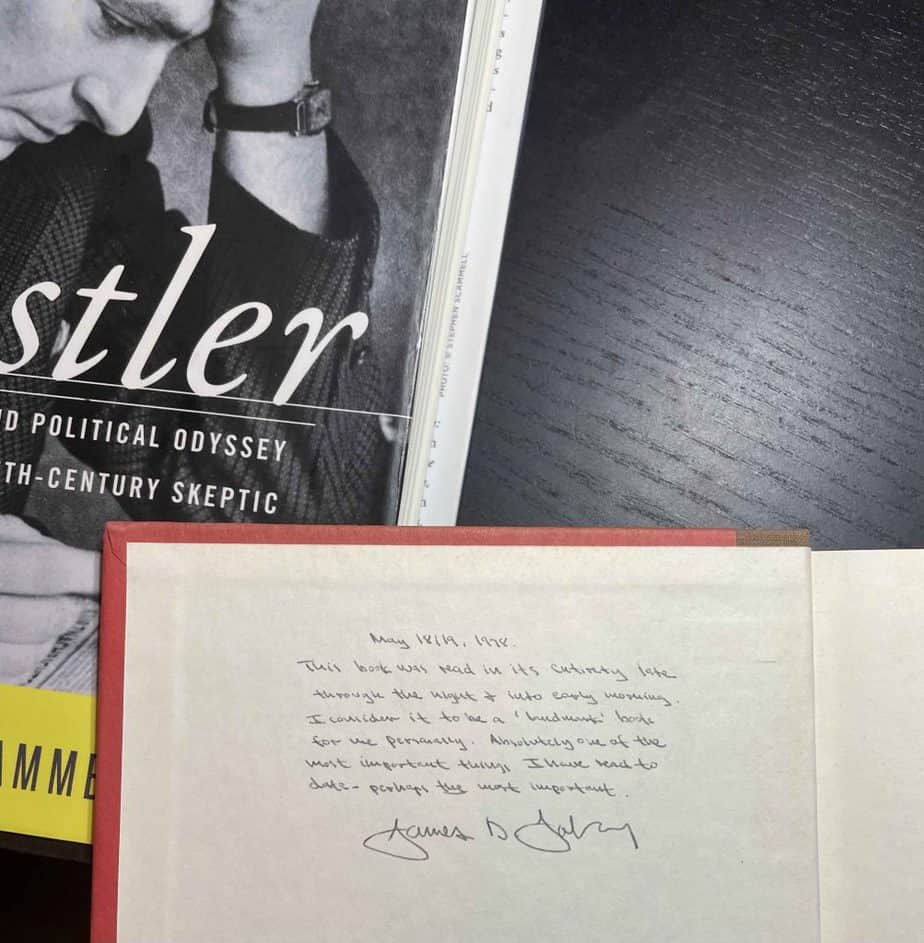 It had a profound impression on me and my life at that time and that influence on my thinking has endured now for forty-three years, corresponding to the beginning of my teaching career at Notre Dame in 1979. Koestler died on March 1, 1983, a day before my 37th birthday.

Freud, of course, thought that any such flights of fantasy were just that–illusion to shield one from facing the ultimate truth–namely death as the permanent cession of the self.[1]In a 1927 letter to Sigmund Freud, Romain Rolland coined the phrase “oceanic feeling” to refer to the sensation of being one with the universe. According to Rolland, this feeling is the … Continue readingErnest Becker, in his profound work, Denial of Death, published in 1973, expounding Freud and Norman O. Brown–succeeds brilliantly in following that line of thought to its stark conclusion–namely our futile and illusionary attempts to imagine our human existence “matters” to any kind of higher order of reality.

Koestler had no “illusions” about his bold proposal that amounted to a rejection of “materialism” without advocating any kind of conventional “dualism.” He wrote in his opening Author’s Note that he hoped his final proposal might throw some light on the human condition and contain a “shadowy pattern of truth.”

When I speak of God, that word means to me the unseen force of all forces that drives this universe and cosmos of which we are cognizant and makes you and me the creatures we are with all the mystical existence we know and enjoy upon this earth.

Jack Pyle, Memoir to his Family

In Hebrew “God” is ‘EL which roughly translates as “Force” or “Power,” and the plural, with a singular verb ‘ELOHIM–could be understood as “that Force of all Forces,” akin then to ‘EL ‘ELYON–traditionally translated The Most High, but again, quite literally, “the highest Force.” All of this was well expressed by my friend Jack Pyle, former minister and author of a fine semi-autobiographical book, The End of All Things Is at Hand: A Personal Journey from Apocalyptic Fears to Historical Reality–about how biblical apocalypticism, both ancient and modern, is a flawed and failed enterprise. I highly recommend his book. 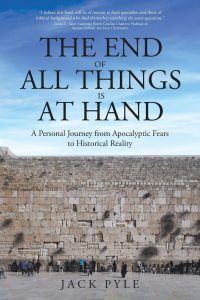